The last week of my vacation i went for the single handed adventure. I sailed down the coast on friday the 31st. I was not really well and thought i cought the pig flue but off i went. I motored through some heavy rain showers to Oskarsborg where i stayed the night. My new Helly Hansen gear worked perfectly! There was a serious party going on after some company event sailing and i joined the best i could dancing and drinking my flu off.

Next morning i was slightly worried but got out of the bunk, got some more fuel and hoisted the sails in the fresh southerly breeze. I thought of reefing but in the end desided to give it a try under full sails, flattening the main with the back stay and twisting out both main and genua. This worked well and provided me with the needed power to punch the waves. I sailed on upwind all day long until Horten. At a certain moment the waves in Breidangen were quite brutal and the kitchen box jumped down on the floor but nothing felt problematic anymore, i felt well and sailed on. Great day!

Entering the Horten harbour the motor stopped. I was not very worried and I didnt know this was the start of a long ordeal of engine problems.

Next day i went by motor to Bolærne before the wind picked up and i hoisted the sails. The wind was easterly and when reaching Færder and slowly turning west i hoisted the spinnakker. Great action! 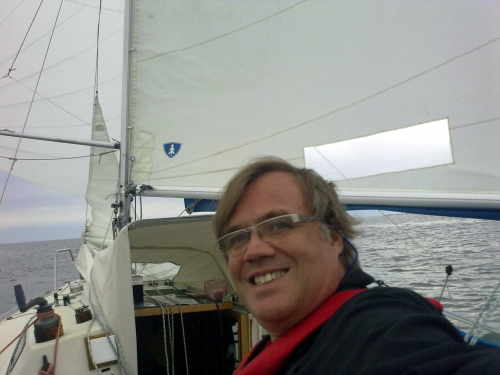 I made it all the way to Larvik, and the to me well-known fantastic Larvik sailing club. My gps-speed was 8.5 at the most sailingin the southward current.

I spent the night in the harbour and next day my brother in law Finn picked me up on monday noon. It was a very rainy day and I enjoyed the stay at Toril and Finns house. We went shopping for some deck gear to make barber hauls on their boat a Maxi 68. Next day the sailing club had its first autumn regatta and I joined with Finn and his sailing buddy Marius as crew. We ended up second in our class. Very well done indeed.

Next day i was off to Kragerø. The engine was getting increasingly wors and i made a deal with Ronny my other brother in law who is a boat builder to take a look. I passed the tragic ship wreck of the "Full City". What an odd name for a wessel. I didnt see much oil spill though there was a lot of action with boats and people trying to clean up the beaches. Despite the tragic circumstances i saw quite a lot of sea birds and the sailing was great in more southerly winds and sunny weather. Though most of the day was on port tack i hit Jomfruland just at the lighthouse and sailed upwind to the southerly entrance to Kragerø. I could not depend on the engine and didnt want to enter the narrow passages from the north in the southerly winds. On entering the passage i hoisted the spi and made good pase towards Kragerø. Reaching Ronnys workshop at Åtangen he took a close look at the engine. Off course the engine behaved flawlessly and we thought replacing some of the fuel supply system would do the trick. Ronny kindly also repaired the bilge pump which i discovered was broken.

After a stay at Shirins and Ronny i was off on my way north. Only after two hours the engine stopped again and i hoisted sail, the wind was luckily picking up and i was on my way again under spi. After consulting Ronny on the mobile we desided I should try to replace the plug, the nearest marina on Hvasser was about to close, it was already four in the afternoon. But i made an appointment with the owner to come by his home harbour to pick up a new plug. I maneuvered into the narrow waters and found the plugg on the dock as promissed. People are just cool! Unfortunately this did not make any difference, the engine cut out again after only few minutes and in the struggel to hoist the sails i hit a rock. Nothing critical but I was getting tired and depressed about this. I sailed on but wind dissapeared and night was falling and i anchored inside Bolærne. It was a moment of loneliness and despair but after having a good meal setting up an anchore lantern I started to enjoy the quite. I had a very nice night in full moonshine and i actually slept well

Next day I woke up early in full sunshine but no wind. I made my way very slowly to the Vallø Marina next to Tønsberg. This involved short streches of motoring but longer ones with paddling. I took the engine to the Yamaha dealer in Tønsberg for repair. Waiting for hours, The guy replaced the termostate and by this was able to lower the temparature to normal. It was quite high and he thought this was causing the engine to stop. Getting back to Vallø late afternoon, getting off and motoring for one hour and again it stopped! Then i was desperate, there was no wind and morale was hurt as well as wallet. Luckily the wind picked up and it was the right wind and very stable. My mood got better and I hoisted again the spi. The wind was so stable and nice that I decided now was the time for a varm meal. While cooking I stuck my head up every few minutes to check the surroundings. Great feeling to eat my simple canned food under spin and drinking freshly made coffe! Chatting with Dan on sms we made up all kinds of activities to do when sailing under spi ;)

When i reached Filtvedt around ten in the evening the wind dissapeared and i signaled to a nearby yacht. The two boys towed me to Oskarsborg were we spent the night. The harbour was totally packed, ive never seen it like this. The tow into the Drøbak sound was so beatyful, the full moon raising and me listening to live music from the Norwegian Wood festival. The boys were artists and we found out we had some common friends. They even invited me to a late night glass of wine. In the morning i was glad i could help them with my battery because theirs was flat. Nothing better than some technical problems to make people socialise. Next day on saturday they helped me further all the way to Nesoddtangen where i started the engine and it lasted all the way home, lucky me.

It was really nice to come back home but this tour also was a fantastic experience and i learned a lot and my security systems and routines seemed to work fine. They are also applicable when sailing short handed or under ruogh conditions.

Sailing single handed was really great. It was actually quite social and i met quite a few people in the harbours. It is also a great experience to master the little ship only with the help of the stupid driver: the tiller-pilot. Strikt security routines help confidence and ease your angsiety and the one of your loved ones. Especially the push button emergency beacon system is reassuring that help will find you within a relative short time. I am already looking forward to the next summer.