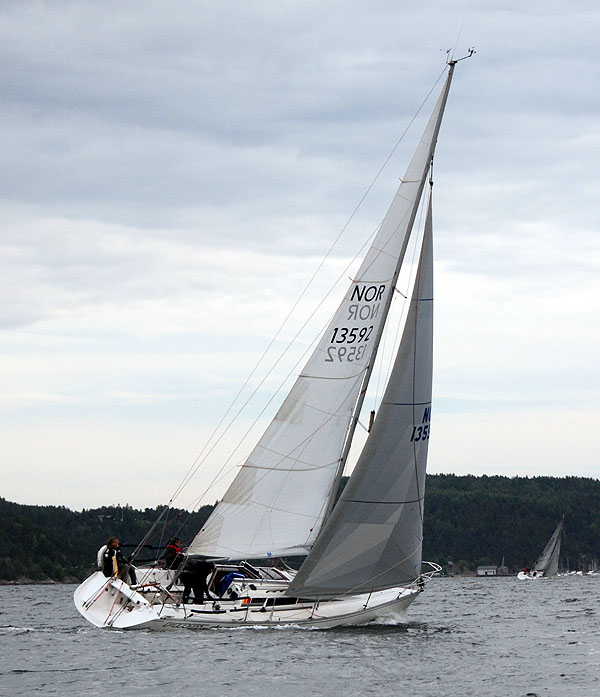 Blue spinakker... Wonder if we couldn't let out a little bit more sheet? 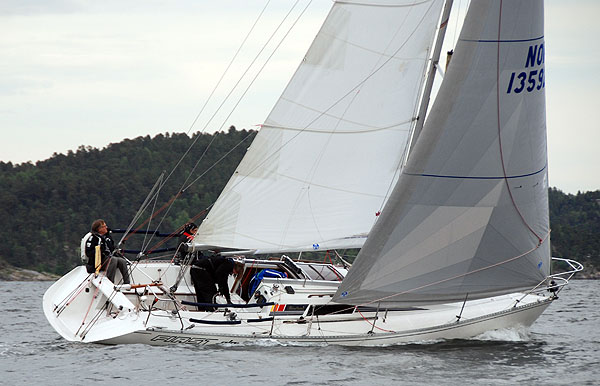 Here some pictures from this winters upgrades and maintenance. 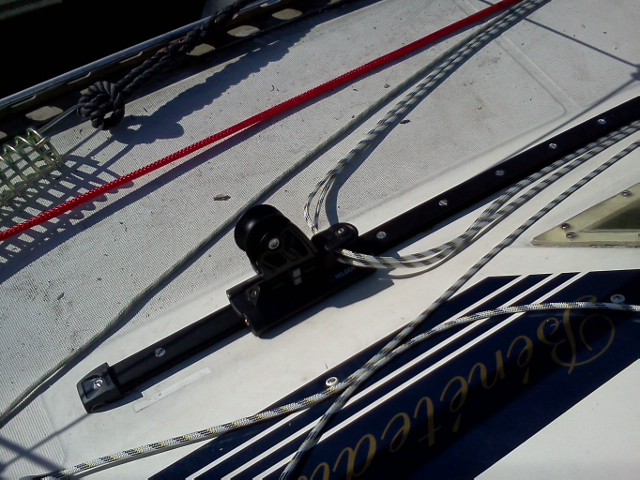 Here are the new Selden genua leads mounted and ready. I repaired the damaged deck with some vinyl ester glue i got from my boat builder friend. I added three layers of glass fiber below. I also changed all the washers and used very big ones at the rear end of the tracks. The Selden tracks are stronger than the original ones and with bigger washers it should be fine. I can't believe the size of the washers used on the old tracks. They were barely bigger than the nuts. I am wondering if this was the original mounting but i cant really believe Beneteau did this. It was ridiculous, and its a wonder they did not brake a long time ago. Mathis helped with the mounting. The tracks are bent so we started mounting one end bending the tracks in place. I was thinking for weeks about how to cope with the sealant that is needed to avoid leaks. Normally i would apply this before putting the track in place, but the bending in place made this impossible. I finally decided to use another procedure: fill the holes from above when in place. After filling the holes with sealant Mathis was fitting the screw from above and i held my thumb against the hole from beneath. This made the screw press the sealant into the space between the track and the deck. There is a spce in the track made for the sealant. I think this actually produced a better tightening and distribution of sealant than the other way. No leaks detected.

The changing of the tracks triggered a chain reaction. I had to split open the old vinyl inner-lining so this needed to be replaced. This was anyway so badly done that i was almost glad it made me starting on this rather unpleasant job. The vinyl was not even stuck under the window frames put it was cut in a distance to the aluminium frames and then there was an ugly patch-work of stripes helplessly glued onto the frames to cover the gap. Probably the most ugly work i have seen for a long time. Also the vinyl was mounted in several pieces and the seams where covered with stripes.

So off the vinyl went and new was bought. I refused to use the contact glue and used instead an extreme mounting glue form Casco. It does not produce any fumes, it sticks immediately yet it is easy to reposition if need. So far it has worked fine.

I had to unmount the windows frames off course to stick the vinyl under. This triggered another series of jobs: The windows where mounted with screws that were 10 mm to long so 50 screws stuck out and i frequently hit my head with bloody results. Another incomprehensible thing done by former owners (not the last owner, he is a real professional). Now was the time to change the screws to shorter ones. The old acrylic windows needed replacing anyway so i made new ones with colored glass and i mounted them with black silicone. Looks great. 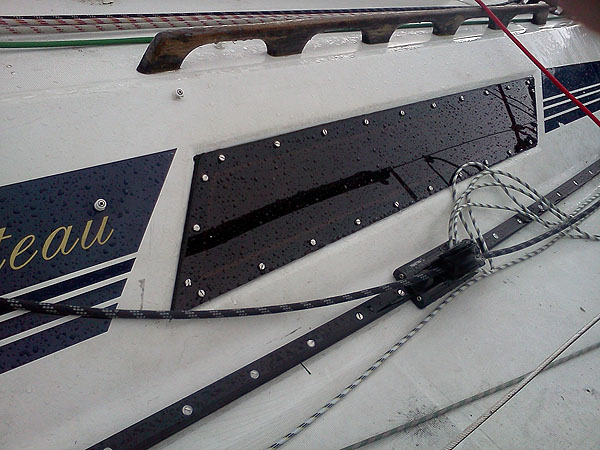 To mount the inner-lining in one piece i had to loosen the rig and unmount the diagonal steel struts inside (seen in the picture belo). I secured the rig to the side i worked on with the haliards. All this went really easy and the mounting of the inner-lining of both sides was done in half a day. Before loosening the struts i marked them with tape to set the exact same tention as before.

Finishing was done with acrylic filler in the corners and the result looks pretty good enough.

Here some images of the finalized roof inner-lining. I painted the bulkhead white after demolishing all ugly cabinets. A bit rough, i dont want to use too much filler.

Check the before picture below. 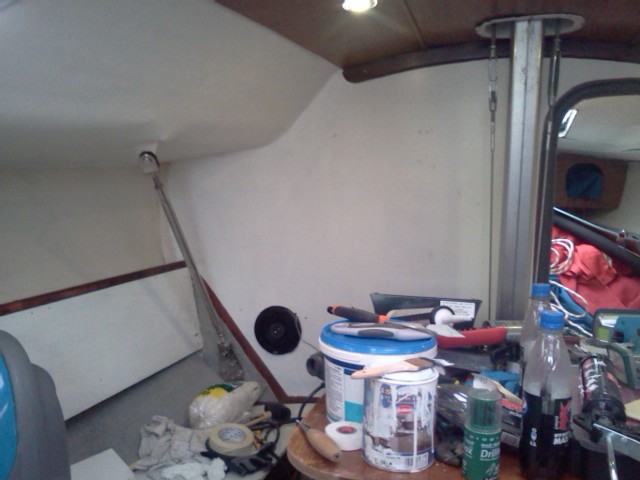 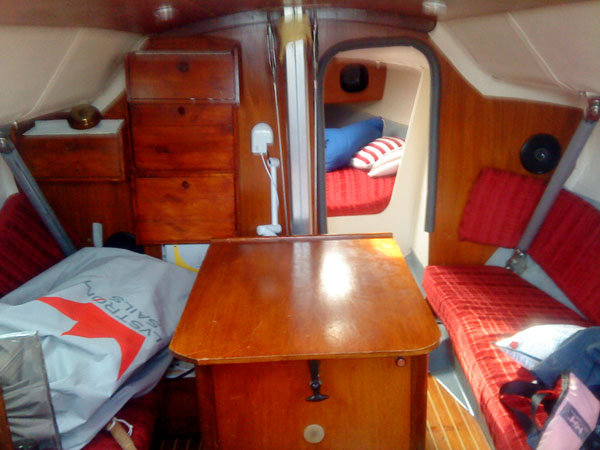 Here an image of the original state when i bought the boat. The original back rests were taken out and i decided to make new ones last year. It is the only weight increasing decision i made, but it was needed for storage. 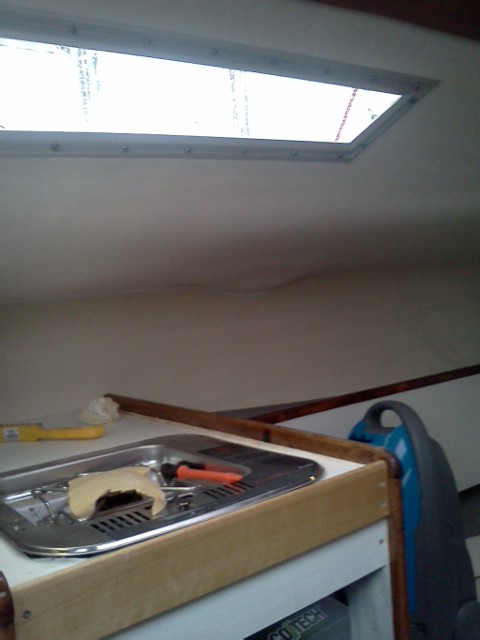 Here the picture shows the new windows and the inner-lining nicely fitting under the aluminium windows frame. 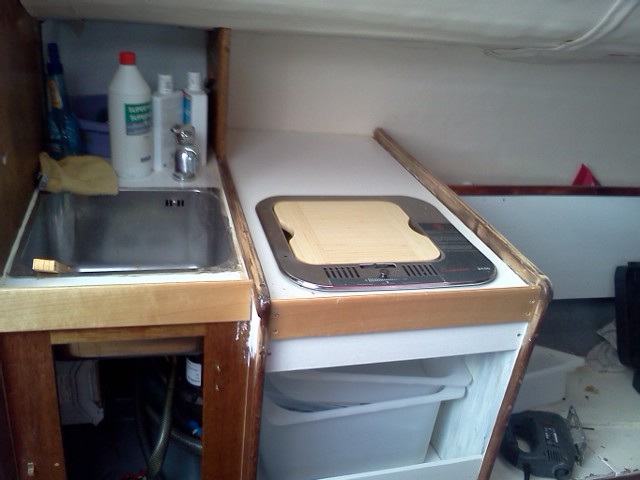 Here the rebuilt galley is on its way. I removed the gas stove, it was ugly, added weight and i don't need an oven and it ran on propane gas (which i am phobic about) and there was no way of storing the gas containers according to the prescription of the insurance company. Dangerous!

Now i use an ethanol burner and use the space below for additional stowing when cruising. This space is actually originally part of the port bunk. When the boat was customized so that the heads were moved from the front cabin aft into a separate compartment the galley was moved forward and the bunk then was shortened. It is too short to sleep an adult. By cutting an opening in the right sidewall seen in the picture i can regain this space when ever need. I already have a cushion that was made out of the cut-aways from the shortened seating of the bunk which fits right into the space beneath the cooker. When ever this space is needed for sleeping we just need to remove the stuff and tuck in the cushion and a full length berth is again available.